Are you an industry pro? We've got a deal for you!

Are you an Outdoor Professional, working in the hunting, fishing, hiking, biking, winter sports, or conservation industry? As a special thank you for helping improve and to promote OffTheGridMaps, we offer outdoor industry professional up to 40% discount on published digital maps in our map store.

How do I get the deal?

We'd love to have you be part of our team!  We're looking for pro's who will help:

Just contact us or send an email with your name, email address, and place of business and we'll set you up with a special Coupon Code that you can use at the time of checkout.  We look forward to working with you!

How did OffTheGridMaps get started? 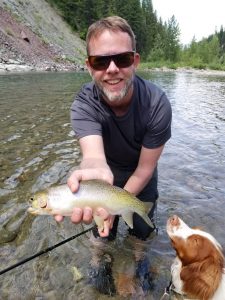 How did it start?

Ryan graduated from Oregon State University with a degree in Geography, and has been working professionally with spatial (GIS) data for over 20 years.  But it wasn't until he got his puppy, Driggs (an American Brittany, bred for "pointing" at upland game birds) that he started making hunting maps for personal use.  The first time Ryan went bird hunting (ever... in his life!), he realized he wanted a map that was easy-to-use, worked offline (no cell service), and GPS-enabled.  Most importantly, he wanted a map with more detail that was focused just on the area(s) he was going hunting.  That way he could not only see where he was, but also where he wanted to go next.

Fortunately, Montana has a great history of sharing publicly available geographic (GIS) data.  Being familiar with many of the sources of data throughout the state, Ryan set off on a quest to locate the best available sources of upland bird hunting map data.  After compiling all of the map features into one system, it was time to start designing the map.

Ryan's goal was to keep as many of the recognizable features people expect to see on a map, but break some of the rules and only include the most relevant map features in order to make OffTheGridMaps clean, crisp, and highly readable.  When friends started asking for maps of areas they were traveling to next, Ryan realized there wasn't an easy way for people to get maps that were zoomed in to just the locations and showed and recreational activities that were important to them.  And so began OffTheGridMaps.com.

Ask OffTheGridMaps to design a custom map for your next outdoor adventure or special event.

OffTheGridMaps wouldn’t be a reality without a lot of support, and not just on a personal level.  While friends, family, and colleagues have played a vital role, free or inexpensive access to software and support are immensely valuable to a startup.  We’d like to acknowledge those people, data sources, and software that have helped us get where we are.

There’s too many to name, and if we started putting pen to paper, we’d probably miss someone.  So for those of you who have provided content and layout ideas, as well as business advice, just know we are incredibly grateful for your contributions!  We couldn’t have made it this far without your help!

Of course, none of this could be done without quality software.  And there is some great open-source software that is freely available to the public.  What are the key pieces of software we use?

One of the best things about the GIS and mapping industry is the availability of data, especially in the state of Montana.  Government agencies are generally the best source of spatial data, and Montana has a great culture of publicly sharing this data widely and freely.

In order to make the most comprehensive OffTheGridMaps possible, we incorporate data collected from dozens of public and private sources including Federal, State, and local governments and special interest groups.  Some of the key data sources we rely upon to keep our maps up-to-date include:

How to report errors and/or omissions?

While we make every effort to keep our maps accurate and free of errors, most of the information on our maps is derived from other sources.  Unfortunately, that means no warranty is provided for the map or its features to be spatially or temporally accurate.

If you do find an error or omission, please consider contributing your changes or recommendations in these three ways:

Our maps are for information only and may not be used for legal purposes. Distances are approximate and may not be suitable for navigation. The information on this map is derived from numerous sources, and no warranty is provided for the map or its features to be spatially or temporally accurate.